A few weeks ago RISD pal and illustration phenomenon, Mary Jane Begin
invited me to participate in this touring blog post! Just want to thank her for the invite. Here is a link to her wonderful work: 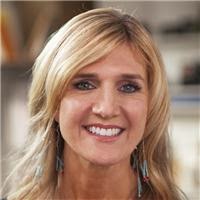 So, here's the way this works- below you'll find a series of questions which have been answered by a number of great writers and illustrators in previous blogs. I'll do my best to answer them and then pass the touring blog torch on to two great illustrators and friends- Ralph Masiello and David Biedrzycki.
Okay- let's go for a ride on this touring blog!
Next stop?!
FaulknerTown, IllustratioNation!

1) What am I working on?
Right now I’m creating the final art for two books. The first- “Groundhog’s Dilemma”, (Charlesbridge, 2015)- is by my wonderful wife- author/librarian and national speaker on early literacy Kris Remenar. It tells the tale of a groundhog who is conflicted regarding his job as a predictor of weather- should he tell the people what they want to hear or tell them what he sees is the truth and perhaps make some unhappy. A tough decision! I’m having a great time developing the characters in this story. 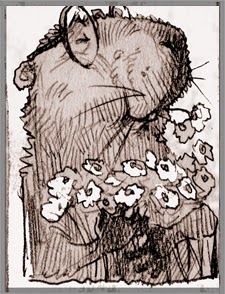 It's a very fun story, for sure. Yet it has a depth that requires that I render the Groundhog and his friends as more than caricatures. They’re asking to be “filled out” with emotional nuance and quirks. So much fun for me to draw!

The second book I’m working on is called “Elizabeth Started All the Trouble” by Doreen Rappaport (Disney/Hyperion, 2015). This story tells the history of the heroines large and small of the American Suffrage movement. 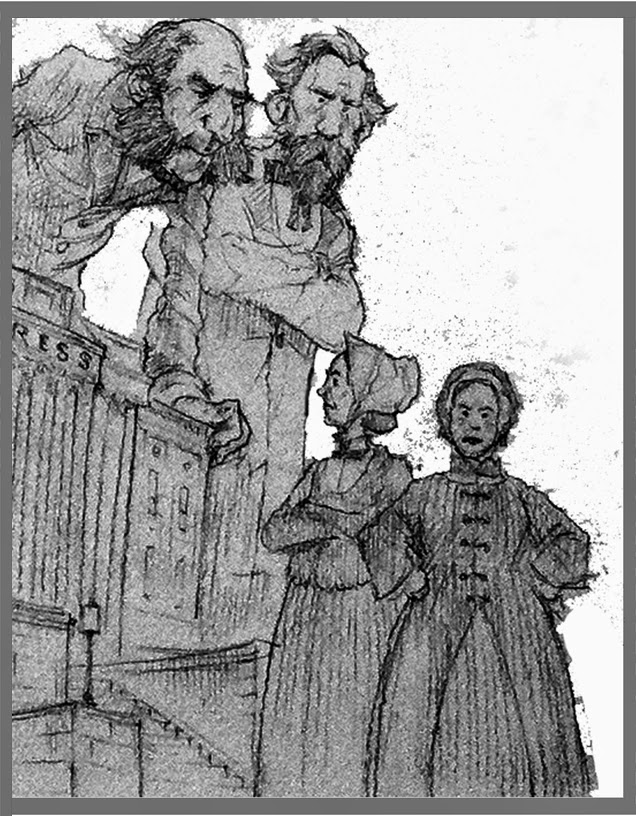 It’s a very serious subject and one that requires lots of accurate research. Doreen’s voice as the author is so refreshing and honest.  Really enjoying rendering the portraits of these great heroines and their efforts to bring equality to all Americans.

2) How does my work differ from others of its genre?
I see myself working in a couple of different genre. 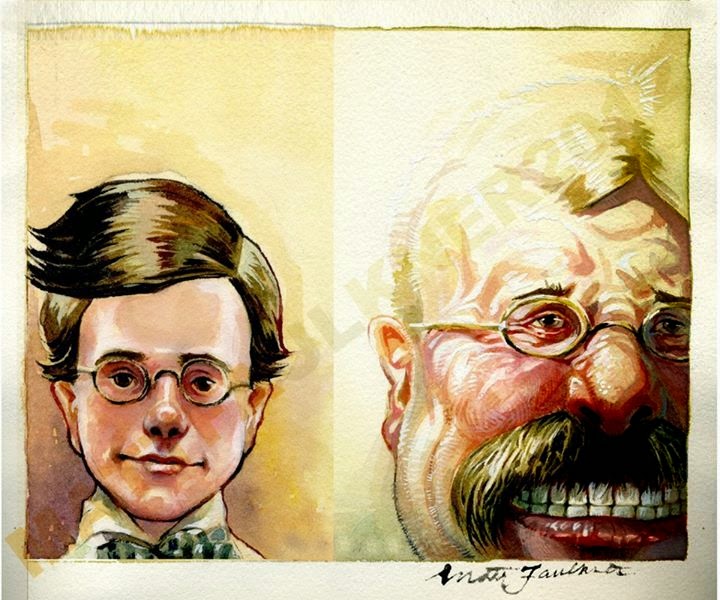 I love historical fiction and yet I also get a kick out of illustrating fantasy and mythic material and quirky stuff too.

As far as historical fiction is concerned I do my best to make my work dance the fine line that attempts to educate and, at the same time, entertain. When I draw a historical figure involved in an action that is pivotal to the growth of our nation or species, it’s imperative that the work be informed by as much research and reference as possible. The moment must express the truth of the effort and for me much of the truth lies in the details. However, I find that history can be a hard pill for me to swallow if it doesn’t occasionally have a dose of wit and humor to wash it down. That effort- to weave the details of history based on research with wit/humor, is one aspect of my work that is very important to me and that I hope stands out.

3) Why do I write what I do?
Words are cool. They're not as easy for me to have fun with as making pictures but I’m getting better at it. And as I practice I see that I can express an idea with words in a way that is different and sometimes even better than the way I might express that same idea with an image. 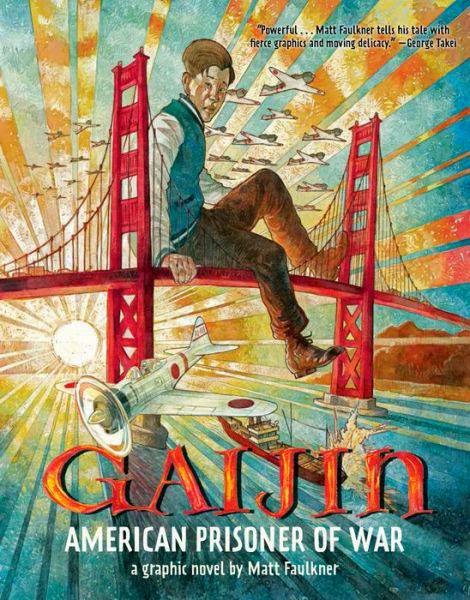 "Gaijin: American Prisoner of War" written and illustrated by me!

I also write because I love to pair these two expressions- words and images. It can be an utterly frustrating effort yet also, so very satisfying.  I’m always very happy to illustrate other people's stories, however I really do enjoy expressing my own stories through words.
The fact is, I write (and draw) what I do because I must. Stories, ideas, characters come to me and if I don’t share them through writing and drawing they can become very insistent, waking me up in the middle of the night, etc..
Setting my stories free. That’s why I write. 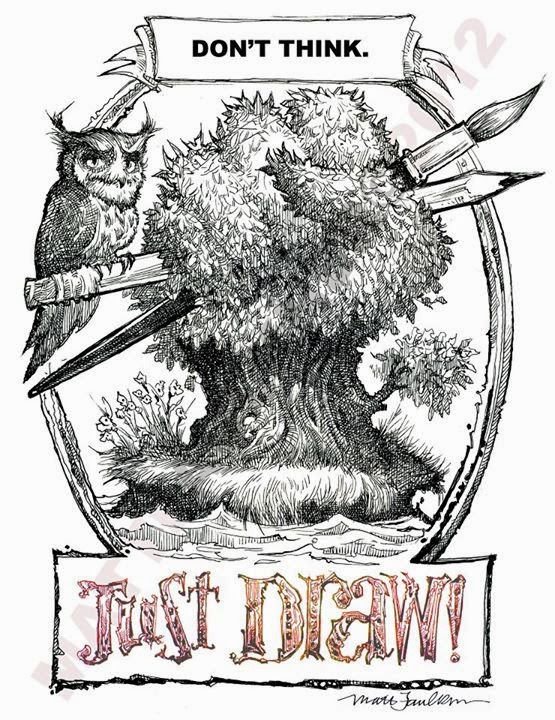 4) How does my individual writing process work?

I don’t like getting up in the morning. But I always feel better when I’ve gotten busy on a creative project earlier rather than later in the day. So, on a good day, I’ll start writing/drawing early. I tend to work on a few things at once. I find that keeping a timer with me helps. I set it for 20 minutes and shift from one project to the next every time the alarm goes off. This may seem tedious and at first, it is. However after a while I find that I get so much more accomplished when working this way. The alarm does not allow for my getting stuck in either an addiction to the enjoyable moments or a repulsion to the annoying moments that can arise while I’m creating.
I do my best to refrain from editing while I’m in a creative groove. Punctuation, spelling, making “better”- I do my best to leave all this to later when I’m crafting an idea. And when creating, neither drawing nor writing take preference. I’ll shift from one to the other without thinking “Oh, look at this- now I’m drawing… and now I’m writing.” Whichever way the story wants out- I just do my best to get out of the way.
The end!

Now I'll pass it on to Ralph and David! Have fun!

A graduate of the Rhode Island School of Design (BFA, Illustration, 1985), Ralph has illustrated for magazines, newspapers and books, created posters and prints, and shown his fine art paintings in galleries throughout the world. Beginning with The Icky Bug Alphabet Book in 1986, Ralph has become internationally known for the children’s books he’s written and illustrated. Since 1987, he has visited over 2,300 schools all over the world, inspiring children with his life story, humor, and art. While visiting schools, he is often inspired himself by the enthusiasm, creativity, and hard work of the students and teachers. This led him to create his unique “How to Draw” book series. The most recent, Ralph Masiello’s Christmas Drawing Book was released in September 2013 to rave reviews. In 2011, his work appeared in a strange and mysterious book called The Mystic Phyles: Beasts, which is the first in a series of books sure to become instant classics. Coming in Spring 2013 is the Ralph Masiello’s Alien Drawing Book and Fall 2014 is the Ralph Masiello’s Train Drawing Book. 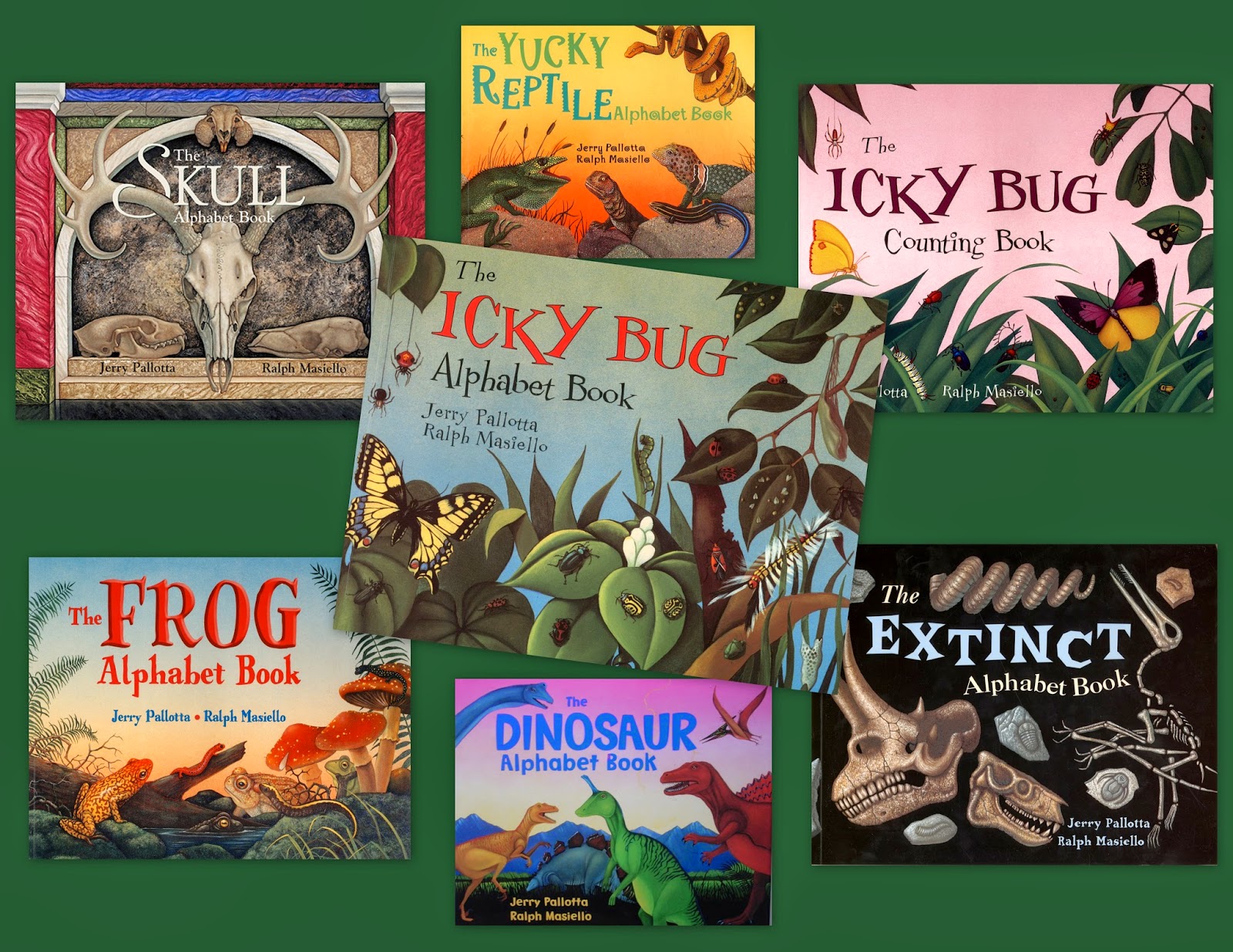 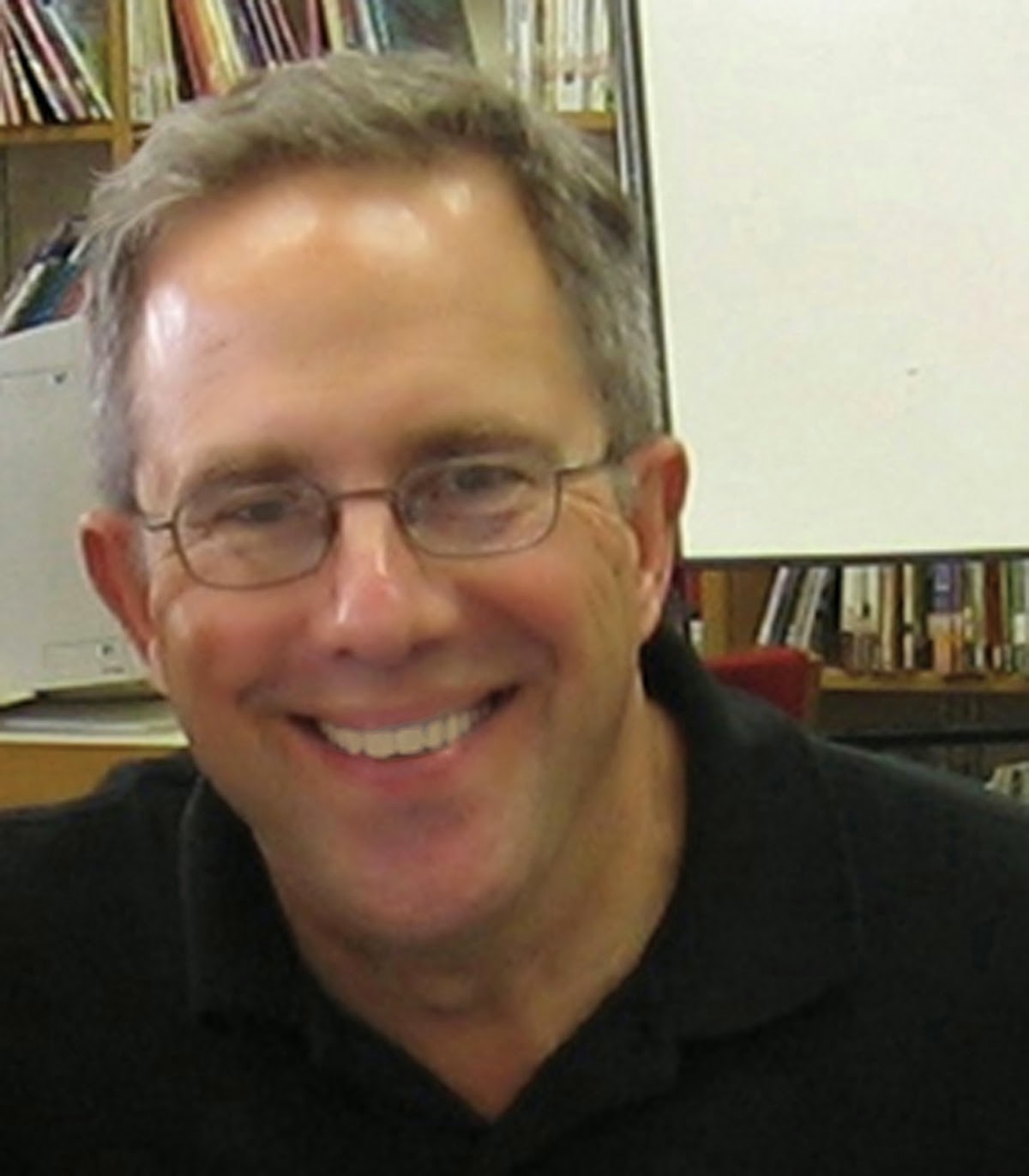 The moment his brother showed him how to draw a face when he was 4 years old David Biedrzycki has been drawing ever since. In his early years he created stories for his parents and friends. A commercial artist since 1980 his work has appeared in magazines, newspapers, book covers, billboards and even ice cream boxes. The supermarket is like a gallery of his work.
Now he has returned to his first love of picture book storytelling.  He has illustrated over 24 books including self authored and award winning Ace Lacewing, Bug Detective series, Me and My Dragon series and his newest Breaking News Bear Alert along with Dory Story and Who Will Guide My Sleigh Tonight? David travels the world to over 70 schools a year sharing his digital work with aspiring young writers, illustrators and readers. 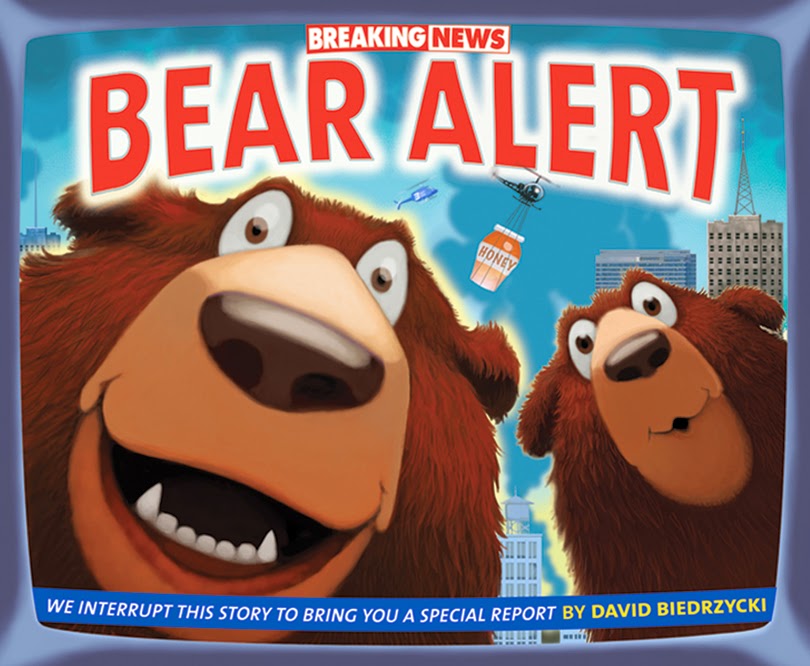 Posted by matt faulkner at 7:01 AM