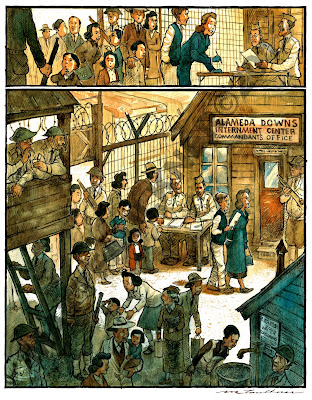 Single page frames from "Gaijin: American Prisoner of War", a graphic novel written and illustrated by me, publ.d by Disney. It's day one in an American
Internment/prison Camp for Koji and his mother Adeline.
Water color, gouache, 2012.
Posted by matt faulkner at 8:31 AM No comments: 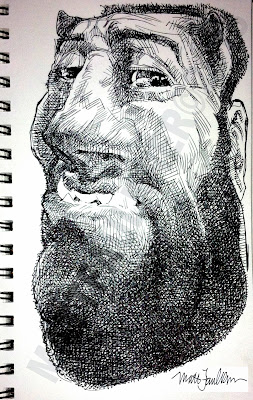 Sketching up some monsters whilst cheering on my bonus daughter at her high school Swim meet! Go Dragons! Any resemblance to real monsters is purely coincidental. Penk&Ink, 2013.
Posted by matt faulkner at 1:20 PM No comments: 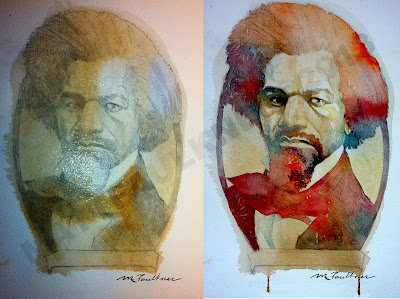 Laying down the underlying water color washes for Frederick Douglass portrait for a book on the American Suffrage movement for Disney/Hyperion.
Water color, pencil, 2013.
Posted by matt faulkner at 9:33 AM No comments: 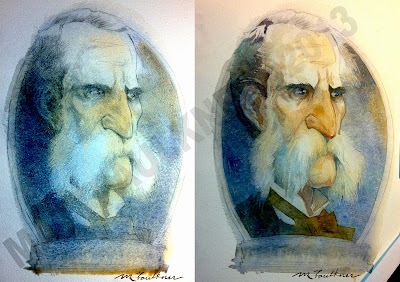 Posted by matt faulkner at 12:51 PM No comments: 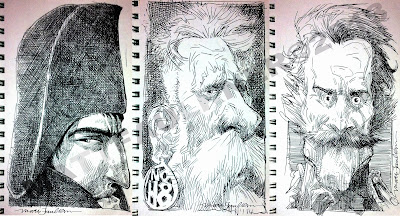 "Tres Amigos", sketchin' up some characters whilst attending my bonus daughter's swim meet, listening to an SCBWI lecture byRuth McNally Barshaw at the Mazza Museum: International Art from Picture Books and watching my Tigers and my Red Sox play nice-
not necessarily in that order.
Pen&Ink (with my trusty Pilot "Precise V5" extra fine pen), 2013.

Posted by matt faulkner at 7:12 AM No comments: 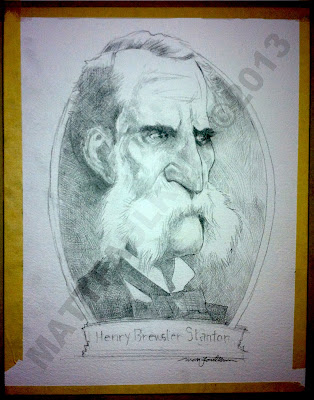 Underlying pencil for water color/gouache portrait for book on the American Suffrage movement for Disney/Hyperion. This guys just about ready for the paint. I don't usually lay down this much lead prior to painting but theirs going to be a considerable amount of rendering done in opaque layers of gouache so I felt good about
developing the values at this stage.
Pencil, 2013. 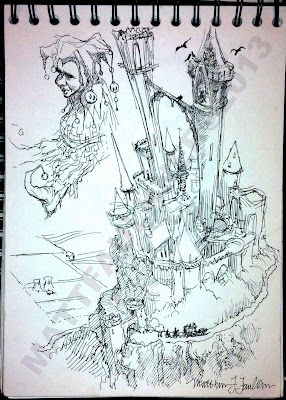 Thumbnail sketches for "The Giving Season", written and illus.d by me, publ.d by a large mall in s.e. Michigan called The Somerset Collection. The mall called me and asked if I could create a holiday season inspired story around which they could build their seasonal theme. I gave them the odd-couple friendship of jester Phelonious Quirke and Princess Sophia. Pen&ink, 1996.
Posted by matt faulkner at 7:46 AM No comments: 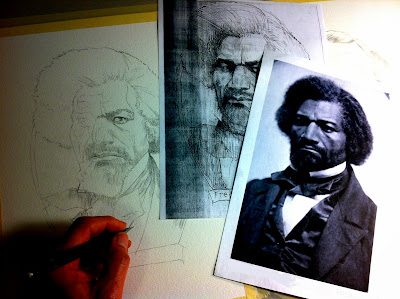 Posted by matt faulkner at 7:01 AM No comments:

Final art for "You're On Your Way, Teddy Roosevelt" 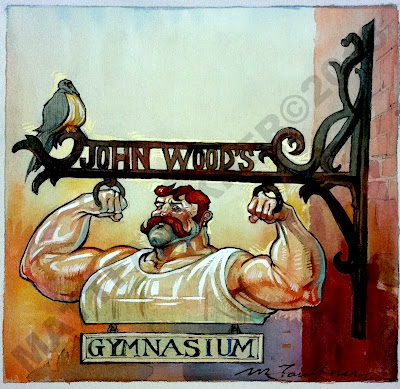 Final art for "You're On Your Way, Teddy Roosevelt", written by Judith St. George, illus.d by me & publ.d by Phylomel. Little Teddy Roosevelt was a sad little guy. He had asthma, bad dreams about werewolves and bullies picked on him. His parents gave him coffee and cigars for the asthma- prescribed by a renowned New York physician- and hired a weight lifting boxer, John Woods, to get him into shape.
Water color, gouache, 2004.
Posted by matt faulkner at 6:05 AM No comments:

2nd stage of sketches for the "Gaijin: American Prisoner of War". Trying to figure out where to put the hand-drawn/painted "Gaijin", by me, publ.d by Disney. Went back and for on putting it on the top of the bottom. Putting it on the bottom won out. Although this looks very much like the previous pencil and water color sketches posted earlier, the difference is in the facial expression of Koj, the placement of the diving Japanese Zero fighter plane and the number of planes up above. Love working this part of a project. My meat and potatoes. Just a figure of speech, actually, 'cause I don't eat much of either any more.
Pencil, water color, 2013. 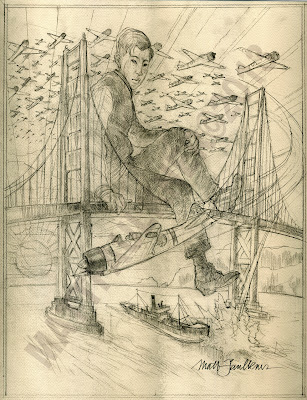 Cover pencil sketch #1 for "Gaijin: American Prisoner of War", a graphic novel written and illus.d by me and publ.d by Disney/Hyperion. One of four full scale covers I put together to show a different palettes applied to the same design. As you can see I put way too many Japanese fighter planes above Koji's head. Had to cut it down by half. In the other sketches for the cover (which I'll post) most of the changes had to do with subtle adjustments to  Koji's gestures.
Pencil, 2013.

Posted by matt faulkner at 7:07 AM No comments: 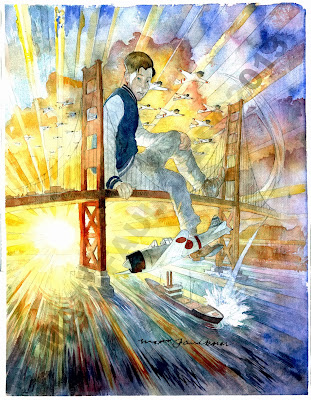 Cover color sketch #1 for "Gaijin: American Prisoner of War", a graphic novel written and illus.d by me and publ.d by Disney/Hyperion. One of four full scale covers I put together to show a different palettes applied to the same design. Post more soon.
Pencil, water color, 2013.
Posted by matt faulkner at 1:19 PM No comments: 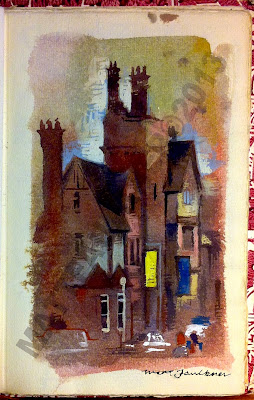 The WB Yeats Memorial Building, Sligotown, Ireland, down by the Garavogue river, which, in Gaelic means "rough little thing". I ventured to Sligo in 1999 to attend the WB Yeats 2 week festival and symposium. I was given the grand opportunity to give a lecture on my work in this fantastic old edifice during my stay. Five colors in this sketch- lemon yellow, burnt sienna, ultramarine blue, cadmium red and titanium white.
Pencil, gouache, 1999.

Posted by matt faulkner at 7:32 AM No comments: 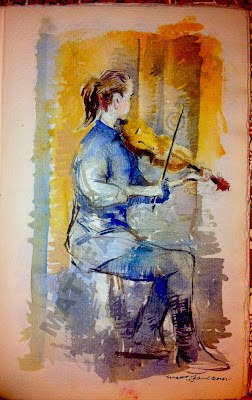 I was walking down Tobergal Lane towards the Garavogue (a rough little stream in the center of town- aptly named the Garavogue, which in Gaelic means "rough little or young thing") in Sligo Town, Ireland, and happened upon this young fiddler. Oooowee, she was good! I felt inspired. Luckily I had my pad of water color paper, a pencil and 4 tubes of gouache- burnt sienna, ultramarine blue, yellow ochre and titanium white.  I bought a cup of tea and a scone, got a cup of water sat down on a big rock and got busy painting. This is the result. Anatomy is somewhat wonky, but what the heck, I was sitting on a rock and this is a very pleasant memory.
Pencil, gouache, 1999.

Posted by matt faulkner at 6:53 AM No comments: 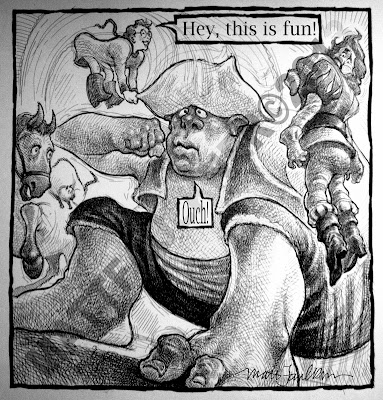 A single-page illustration for "The Moonclock", the second book which
I'd written and illustrated for Scholastic Inc..
Pen and ink, 1991.

Posted by matt faulkner at 6:15 AM No comments: 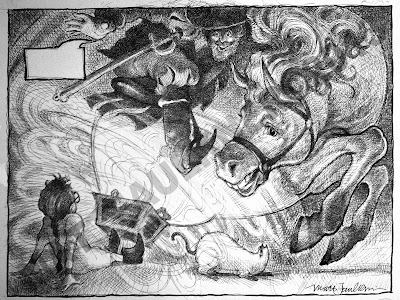 Cover art for "The Moonclock", written and illust.d by me, published by Scholastic Inc.. That's Mr. Kolshinsky atop his horse leaping out of the little chest. His character is based upon an historical figure- Franz George Kolshitzky- hero of the siege of Vienna, 1683. Now, you may notice that the character in the book is called Kolshinsky, not Kolshitzky. This was because the marketing people were concerned that parents might be offended that the word "shit" was in the middle of the actual heroes name. Really?
You can't make this stuff up.
Pen&Ink, 1991.

Posted by matt faulkner at 3:25 PM No comments: 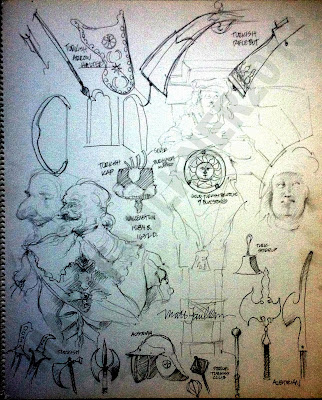 So, in 1986 I sold my first manuscript to Scholastic- a book called "The Moonclock". The story is set during a pivotal moment Vienna, about 1683 or so, a big pillow fight involving the Turkish army taking a thumping from a little girl named Robin. Any way, that's not the important part. The important part was my little fallacy that somehow, if I promised to go to Vienna and do research, Scholastic would get all excited and give me a bigger advance. They didn't. I went anyway. Here is a page from this enormous sketchbook I dragged along with me- thing's gotta be about 6 feet by 8 feet. Okay, that's an exaggeration. But it felt that big. I think maybe it's 16 inches by 20 inches. These thumbnails were done at the Museum of Military History, or, as the Viennese would call it- Heeresgeschichtliches Museum Wien. They had tons of stuff left behind by the Turks after they got trounced- tents, armor, swords, camp chairs, pillows, cell phones- all sorts of stuff.
I coulda spent months in there.
Pencil, 1987.
Posted by matt faulkner at 7:09 PM No comments:

Portrait sketches of Henry Brewster Stanton, husband of American Super Shero- Elizabeth Cady Stanton. I'm doing portraits of all the major players in the suffragette movement for a book on the subject to be published by Disney in 2016. Here's the resource I'm using to draw old Hank. This is him back in the mid-19th century. Fine looking specimen. Very proud of his chops. The sketch in the middle was done in my sketch book. After working that up for a bit I took a copy of it and traced it with a light box onto some Arches 140 lb. cold press. The image all the way to the right is that traced sketch with tone added. Did some refining of features, softening angles and, most importantly, I added the darkened hair on his head. Funny, I was wondering why he looked older in the sketchbook drawing, then I darkened his hair (as per his photo) in the underlying drawing for the water color and, whatdyaknow, it looked a little more like the old boy. Actually, I'm not a fan of Henry's. I know everyone has their limitations but he skipped out on Elizabeth at a very important moment of the first women's rights conference in 1850. It was supposed to be his job to read the Declaration of Sentiments and Resolutions (Elizabeth's creation, a Declaration of Independence for American Women, if you will). At that time it was thought unseemly for women to stand up and speak before a crowd. He was asked to do the speaking and was happy to do it until, that is, he read that one of Elizabeth's demands was the right to vote. For some reason this really put Hanks boxers in a twist. Apparently, he packed his bag and left the night before he was to read the Declaration. Geesh, Hank. At least you could've hung around for the after glow. Pencil, 2013.
Posted by matt faulkner at 10:24 AM No comments: 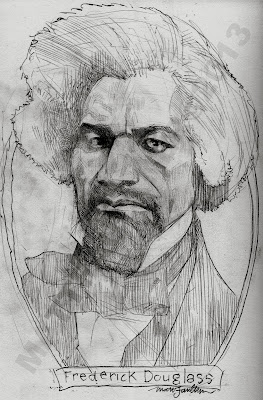 Character sketch of Frederick Douglass for picture book on the (s)heroes of the women's suffrage movement, to be publ.d by Disney/Hyperion. Mr. Douglass was frequently frustrated and infuriated by the selfish-white-men establishment of his day, hence the sour look on his face. Just imagine how surly he'd look today as the petulant Tea Party takes us on their regressive roller coaster ride to conservative temper tantrum town!
Pencil, 2013.

Posted by matt faulkner at 5:54 AM No comments: