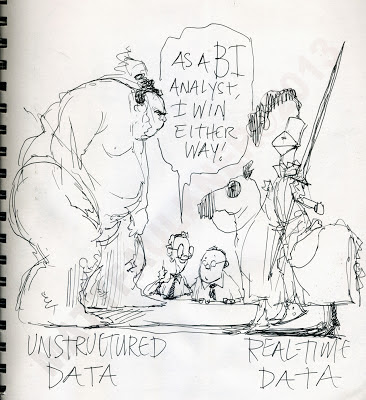 Thumbnail sketch for editorial illustration for a weekly article called "On The Mark" for Computer World Magazine, art directed by the übertalented Stephanie Brockway! Pen&Ink, 2006.
Posted by matt faulkner at 10:12 AM No comments: 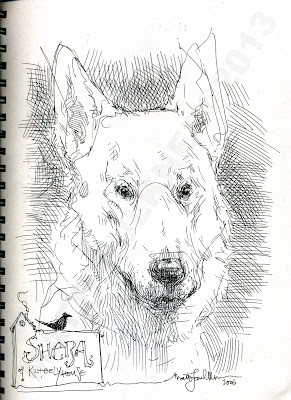 Another sketch from the visit to Tralee, County Kerry, Ireland. This is Sheba. She greeted us at Kilteely House- a lovely 17th century georgian mansion on the hill above Tralee. She belonged to my friend Michael. He was the director of a small graduate school for language studies that was situated in Kilteely House. I lectured there and remember it as a splendid place but sadly the school is no more. Nice to have this memory of Sheba. I need to do more of this kind of sketching. So much more satisfying than photos to me. Pen&Ink, 2006.

Posted by matt faulkner at 10:53 AM No comments: 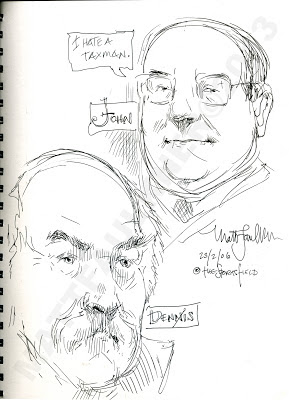 Couple more of the lads I sketched at the Sportsfield Pub, Tralee, County Kerry, Ireland. It was late February. Close to tax-time, I think, in Ireland. John was fairly clear about his thoughts on taxes and those who collect them. Pen&Ink, 2006.
Posted by matt faulkner at 8:15 AM No comments: 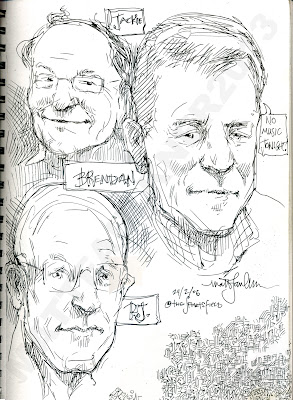 More sketches done at the "Sportsfield", a little pub in Tralee, Ireland. Here are a few more of the lads I did quick sketches of in the Sportsfield all those many nights ago. Funny thing, I wanted to sing when I went to the pub. People do that in pubs in Ireland. Or, at least I do. And those who know me, know that I will sing without much encouragement. MIchael, my Irish friend who invited me to join him at the pub, assured me that this was a "singing pub". However, the crowd that made it to the pub that night weren't very much interested in hearing anyone sing, but most especially me. Brendan (shown in this sketch) was one of the more vociferous in making his feelings known about my singing. I applauded him in his candor and sang anyway. If it had not been for my pen and the sketches I did of just about everyone in the place, it's quite possible I would've found myself out on the curb in short notice. "Noisy yank." Another testament to the power of sketching. Ruth McNally Barshaw﻿ knows what I'm talking about! Pen&Ink, 2/23/2006.
Posted by matt faulkner at 9:34 AM No comments: 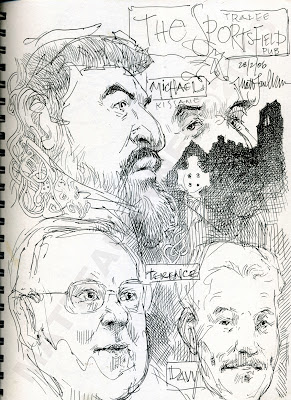 Sketches done at the "Sportsfield", a little pub in Tralee, Ireland. Once I'd drawn Michael, well, I just had to draw Terence. And then Davy, of course. And then about a dozen other people besides. And the pub's shepherd dog, Sheba, They were very happy with the drawings. Needless to say, I didn't need to buy any more Guinness for myself that night. At least, I don't remember buying any more. Pen&Ink, 2/23/2006.
Posted by matt faulkner at 8:50 AM No comments: 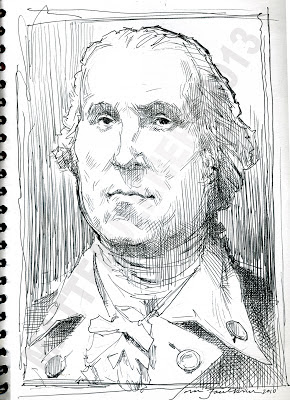 A sketch that started out as Washington and ended up as Benedict Arnold. Fascinating guy, that Benedict. Brilliant, charismatic, paranoid and maybe even a little bipolar. Pretty much saved the nation with his courage and grit during the Battle of Saratoga. Then tossed that all into the gutter when he decided that he was not being given his due as a hero and sold out to the British in a big, big way- he was to give the keys to West Point (where he was Commandant), the fortress that held the most important water way in the northeast, AND deliver George Washington in the bargain. All this for a nicer uniform, a title and cash. From all accounts he died a very unhappy expat in London. However, none of this can take away from his efforts in Saratoga and Canada. A brilliant being. Pen&Ink, 2010.

Posted by matt faulkner at 8:34 AM No comments: 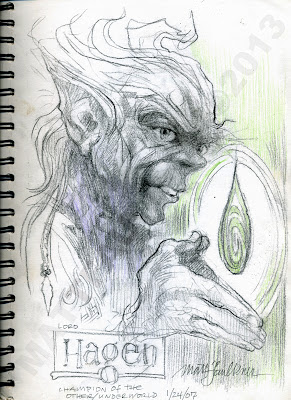 Lord Hagen, Champion of the Other World. Saw him in a dream. Charcoal, 2007.
Posted by matt faulkner at 9:24 AM No comments: 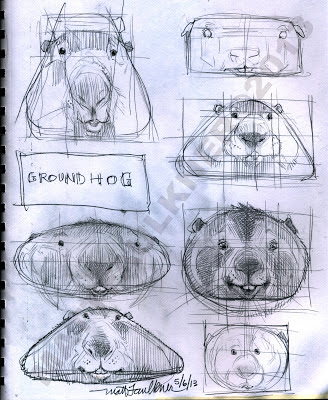 Groundhog sketches. Working on finding nice blending of something that follows the bone structure of a groundhog but also has a fun characterization. Still thinking. More sketching.
Pencil, 2013.

Posted by matt faulkner at 9:39 AM No comments: 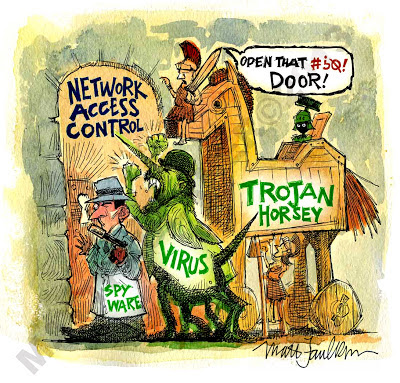 Editorial illustration for a weekly article with the tag "On The Mark", which I used to draw for Computer World Magazine, art directed by the übertalendted Stephanie Brockway﻿! It was a great gig. Mark (of "On the Mark") would email me the article on Monday in the a.m.. I'd work up some visual ideas and send back sketches in the afternoon. I'd usually get the go ahead from the editor in the evening or early Tuesday and get busy putting together the final art. First a pen&ink drawing, copy that, place it on the light box and do a water color wash on some Arches 140lb. cold press. Then scan the drawing and water color together and zip the thing over to the magazine by Tuesday evening. Got to put some fun stuff in the art such as "Marvin the Martian" and "Get Smart". Miss that gig. Pen&Ink, water color, 2006.
Posted by matt faulkner at 8:02 AM No comments: 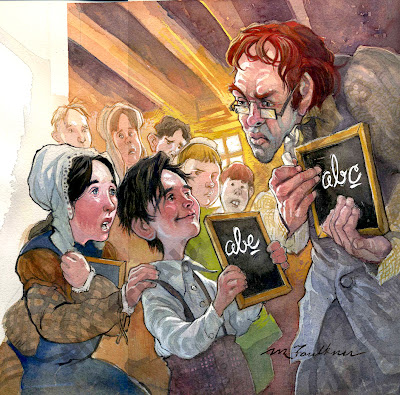 Final art for "Stand Tall Abe Lincoln" written by Judith St. George, illus.d by me and publ.d by Phylomel/Penguin&Putnam. It would appear that young Abe was a bit of a scamp, forever terrifying his beloved older sister with his antics.  The little dickens.  Water color, gouache, 2004.
Posted by matt faulkner at 11:22 AM 2 comments: 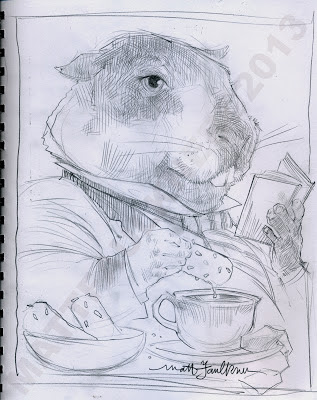 Ok, this is supposed to be a groundhog enjoying tea and biscuits. While I like his character, the fact is, this simply isn't a groundhog yet. Right now he's looking more hampster or guinea pig. Going to go back to doing some anatomical studies of groundhogs for a bit. No matter how cute the character, if I haven't communicated its essential nature, in this case "groundhog-ness", then it's back to the drawing board. Pencil, 2013.
Posted by matt faulkner at 9:53 AM 2 comments: 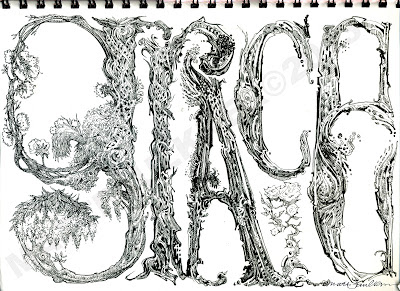 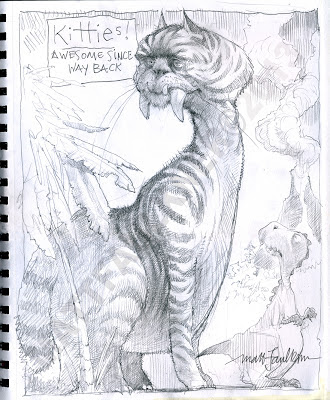 Just got back from the fantastic WIld, Wild MidWest SCBWI Conference in Fort Wayne, Indiana. The presentations were wonderful. More than a couple of the presenters showed pictures of their cats. I just had to draw a cat. This is what came out. Love being able to sit in a lecture and draw (my way of taking notes) and not feel like Mrs. Duffy, my sixth grade teacher, may she r.i.p., is going to come out of the woodwork, grab my pencil and shout "No more scribbling, Mr. Faulkner!". And even if she did, I'm sure my SCBWI peeps would have my back and hand me another pencil when she wasn't looking! Pencil, 2013.

Posted by matt faulkner at 1:09 PM No comments:

Hand drawn and painted text for cover of "Gaijin-American Prisoner of War", a graphic novel by me, publ.d, edited by Rotem Moscovich﻿, publ.d by Disney/Hyperion. Some folks have asked what the meaning of "Gaijin" is. Here's what the dictionary says: "Gaijin (外人?, [ɡaidʑiɴ]) is a Japanese word meaning "non-Japanese", or "alien".[1] The word is composed of two kanji: gai (外?), meaning "outside"; and jin (人?), meaning "person" – thus, the word could also, in some contexts, be translated into English as "outsider". Back in the 1940's it was used by some as a racist slur and some people today still see this as an offensive name. I'm using it in the context of calling the hero of the book an outsider. Being half Japanese and half Irish American, he is ostracized by both cultures in the story. Pencil, water color, gouache, 2013.
Posted by matt faulkner at 6:55 AM No comments: 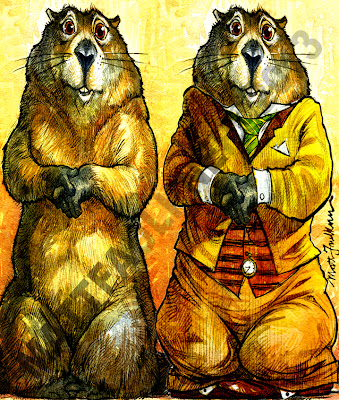 The Groundhog in "To See or Not To See", written by Kris Remenar, illus.d by me, edited by Yolanda Scott, to be publ.d by Charlesbridge 2015.. What to wear?. Water color, pencil, gouache, 2013.
Posted by matt faulkner at 8:34 AM No comments: